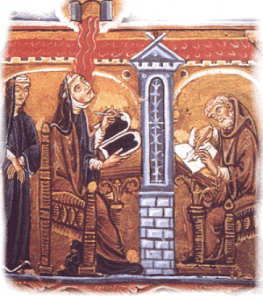 Blessed Hildegard von Bingen was a “Pre-Renaissance Woman” of the early 12th Century who wrote theological, botanical and medicinal volumes (including the use of herbs and gemstones), as well as letters, poems, and the first surviving morality play, while supervising brilliant illuminated manuscripts.

One of her works, the Ordo Virtutum, is an early example of liturgical drama. In addition to her duties as Abbess of Rupertsberg, she was a prolific and highly original composer, whose music is still played today.
Although she called herself “but a simple womanly creature,” she was known to her contemporaries as the Sibyl of the Rhine.

As if these achievements were not outstanding enough, she soared above the boundaries of ordinary thought and knowledge, and into the sublime. Hildegard articulated a vision of God as a pulsating life-force present in our lives, interpreted as essentially feminine. Viriditas is a guiding theme, used constantly in her works. It has been translated in various ways, such as freshness, vitality, fertility, fecundity, fruitfulness, verdure, or growth. In Hildegard’s understanding, it is a metaphor for spiritual and physical health, which is visible in the divine word.

We've given Hildegard a web site dedicated to her and those of us who are inspired by her.
Please take a look when you have some time.